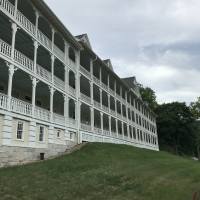 The day after I finished chemotherapy, we threw some stuff in a bag, dropped the cats at the vet, and jumped onto the Pennsylvania Turnpike. Our destination? The Omni Bedford Springs Resort, where we spent our 35th wedding anniversary. This year is our 38th, so we decided to celebrate the end of chemo and our anniversary with a big old splurge. So we went back to Bedford Springs. Our room was in the historic wing,... Read more →

I have rung many bells in my time - school bells, dinner bells, silver bells, Taco Bells - but the bell I rang today was the best bell of all. See, there's a tradition in the chemo world that you ring a bell when you finish your last chemo treatment. Who am I to buck tradition? Ringing the best bell. See that lovely tiara? It's not mine, even though I bought it. Actually, I bought... Read more → 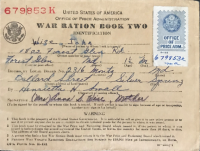 Here's an interesting little piece of history from World War II - a War Ration book. It's only the cover, because Mom used the stamps to buy rationed goods, like sugar, meat, and canned goods. I'm guessing that each family member could get one, because this book is for John Wise, my older brother. (He died before I was born.) What I find fascinating are the instructions on the back, particularly the warning on the... Read more →

So You Know That Thing? It Happened!

So, I've been writing about the Thing since 2008, wishing for it, wanting it, hoping against hope, only to be disappointed every year. The Thing, you see, is the Stanley Cup, hockey's Holy Grail. I've been a hockey fan since 2004, when my sister took me to a game and I was instantly hooked. Joe and I became season ticket holders in 2008, and didn't give them up until we moved up here to enemy... Read more →

C'mon, I Could Use The Money!